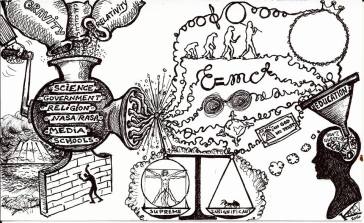 Who measured Earth’s axis?
Who measured Earth’s core?
Who measured Earth’s rotation?
Who measured Earth’s curvature?
Who measured Earth’s weight?
…NO ONE! EVER! If you can’t measure it simply doesn’t exist. If you can’t replicate it, if you can’t test it and if the made conclusions and hypothesis don’t meet reality – then it is not science. Mathematical equations don’t cut it. Simply IT MUST BE THERE doesn’t cut it. BELIEVE US doesn’t cut it. When “science” fails to provide evidence of its claims on a very basic level it CAN NOT and SHOULD NOT be called science any more. It is an alchemistry. It’s an INDOCTRINATION. A DOGMA. A PROPAGANDA. A RELIGION. A BELIEF SYSTEM with NO morals. An OCCULT. An AGENDA which benefits only those who are perpetrating it forward. And those are the sycophants who rule the world. They are sick bastards who’s desire for money and total power drew them MAD. The absolute power have corrupted their hearts, minds and souls to the very core. Their madness has obsessed them so much that they have become her slaves. They know that there is no forgiveness for what they have done to humanity and they are using all they can to keep them away from death. They what to live FOREVER. Here on Earth. Because they know they will have to pay the price for their wrong doings. The price that they have abused their Power to control the world. A world who’s spirit got crushed by the Blue Ball idea. A world where there is no God. The theory that the Earth is a sphere demolished God. In this false reality where there are billions of galaxies with billions and trillions of balls circling one another, where there is an “outer space” God is not needed. When you have no God your morals are blurred, good seems bad and bad seems so attractive. Without God you have no concept for a JUDGE in front of whom you must be responsible for all your actions at the end. You feel that you can do whatever. And you’re easily manipulated. And in the world where money are the main source of living those who have them do have the power to make you do whatever they want just so you can make a few bucks. People who are blinded and intentionally robbed from their real knowledge of God can not say no to money. They just can’t. They feel small, insignificant, and that nothing depends on them. Materialism absolutely dominates in a world without God. And that’s why those in power did and do everything possible to keep the humanity blinded beLIEving in a Godless universe – that is of NO importance, where everything is only materialistic, where spirit and a 6th sense is not needed.
In conclusion – Modern “science” has denied all actual observations to perpetrate and maintain it’s Godless religious anti humanistic DOGMA. It’s time for us to RISE from the ashes, it’s time to WAKE UP from this nightmare and let our Spirit SOAR AGAIN! It’s time for REVELATION people! It’s time!!