The Absolute Fraud of Gravity

Newton’s Law of Gravity does not use the word “weight” in any description of gravity!

( ~ Another excellent proprietary piece from TheGeocentricGnostic.com)

The NOAA quotes this gem, “The Effect of Centrifugal Force. It is this little known aspect of the moon’s orbital motion which is responsible for one of the two force components creating the tides. As the earth and moon whirl around this common center-of-mass, the centrifugal force produced is always directed away from the center of revolution”.

The surface of the oceans would bear the brunt of the weight since centrifugal force is trying to spin the water away from it’s axis. But according to GRAVITY DEPENDS ON MASS AND DISTANCE AND NOTHING ELSE .

So, the gravitational pull at the surface has to be less because it’s further from the center of mass (the ocean floor), but somehow the magical properties of gravity change to defy its own definition.

The Absolute Fraud Of Gravity

Before we apply some scrutiny to gravity you must take into account the mountain of fraud that has been accumulated in regards to NASA. Before you believe in anything that NASA promotes or espouses remember the dossier of deception that has been piling up thus far. When we think of gravity the picture of Isaac Newton and the falling apple usually come to mind, but that naive image is a crafted whitewashed version of Isaac Newton.

But what do we really know about Isaac Newton? First of all he was very similar to the boys from NASA and delved into occult numerology, Alchemy and Esotericism. However Newton was the Grand Master of the Secretive Priory Of Scion. The Priory Of Scion was dedicated to the preservation of the satanic Merovingian bloodline that was an early forerunner to the Rothschild Khazarian Mafia.

It’s also clear that Newtons Principia was rewritten around 1723 by the Jesuits who are the real hidden hand behind the RKM.  This explains the seemingly paradoxical nature of Newton and how the finished work of Newtons Principia was further distorted to create false political and scientific dogma manifested in NASA today.

[1]To return specifically to Newton once more, the cute little tale (originating from Newton) about seeing an apple fall from a tree and thereupon falling into a “deep meditation” on the nature of gravity sometime in the summer of 1666 is obviously a politically correct and safe enough version of events that would have served to protect Newton’s image from his secret obsession with alchemy and esotericism. Note: The year 1666

It was a collection of works found posthumously in Newton’s library, papers and note books which revealed that Newton had spent more of his life immersed in studies of alchemy (as well as theology, Bible chronology and natural magic) than he had spent working on “pure science.”

Ironically, since Newton’s time, all notions of forces somehow transcending time or space were considered to be inviolation of Newton’s Laws, despite the fact that the great man himself saw neither his laws as sacrosanct, nor as the limits of a universe which—in opposition to today’s fawning atheistic worshipers of Newton—he saw as God’s creation!

British astronomer and cosmologist Edward Harrison noted that “if Newton had lacked a mystical outlook there could not have been a Newtonian universe” What an unusual paradox since Newtonian Science has always been presented as a somewhat mechanical process that is likened to “gears” and “machinery-like” concepts that are purported as unbreakable laws. So even in the creation of Newton’s laws, Newton could not have elucidated his concepts without the aid of an intelligent designer. Quite a contradiction right from the get-go wouldn’t you say? Unsurprisingly Newtons concepts were delineated through the centuries to omit any reference to god or an intelligent designer from which his ideas originally sprang from.

As in Parts 1 and 2, we find Newtons occult roots much like NASA progenitors  Aleister Crowley, Jack Parsons, L. Ron Hubbard, Walt Disney and Arthur C. Clarke. To further muddy the waters of gravity, it was Arthur C. Clarke that invented the term “Zero G” in his 1952 book Islands In The Sky. If you read Parts 1 and 2, it’s hard to disregard any coincidences.

So let’s restate the question that Isaac Newton had to ponder when that magical apple fell from the tree. QUESTION: Why did the apple fall from the tree? ANSWER: Because it was more dense than the air around it. Conversely, if we let a balloon with helium go, it rises because it’s less dense than the air around it. What a truly simple idea, density. Remember, the same awesome power of gravity that holds the oceans to the earth like Velcro as it spins over 1,000 mph, somehow permits birds and insects to fly around as if it didn’t exist at all.

The hypocrisy of gravity is on display in the very oceans that are purported to be constrained by it. (note unintended hypocrisy of second sentence)

[2]In the water, the buoyant force of the water keeps you from sinking to the bottom, but you don’t actually notice the resistance to gravity. So astronauts train for weightlessness in deep swimming pools. You are still under the influence of gravity – but the buoyancy counteracts it, so you feel weightlessness. This is one of the reasons why scuba diving is so enjoyable.

The key word here is buoyancy. Here is a quote from the Wiki page.

“For this reason, an object whose density is greater than that of the fluid in which it is submerged tends to sink. If the object is either less dense than the liquid or is shaped appropriately (as in a boat), the force can keep the object afloat.

The only difference between water (liquid) and air (gas) is the density. Buoyancy is not confined to just water, it also pertains to “Air buoyancy”

[3]Similar to objects at the bottom of its ocean of water looking upward at objects floating above it, humans live at the bottom of an “ocean” of air and look upward at balloons drifting above us. A balloon is suspended in air, and a jellyfish is suspended in water for the same reason: each is buoyed upward by a force equal to the weight of fluid that would occupy its volume; when that buoyant force equals its own weight, it neither rises nor falls. In one case, the displaced fluid is air; and in the other case, the fluid is water.

The Earth’s atmosphere is composed of air. Air is a mixture of gases, 78% nitrogen and 21% oxygen with traces of water vapor, carbon dioxide, argon, and various other components. We usually model air as a uniform (no variation or fluctuation) gas with properties that are averaged from all the individual components. Any gas has certain properties that we can detect with our senses. The values and relations of the properties define the state of the gas. Again

referring to the “state of matter”, NASA makes it clear that the “state of matter” is the medium that water or air buoyancy can be achieved. Gases and liquids are two sides of the same coin, one less dense than the other. NASA’s other “state of matter”is a solid which has more density than either a liquid or gas, making it possible for humans to have total buoyancy. However, if we go to the beach and put our feet in the sand we actually sink because it’s density is less than a slab of concrete for example.

I would like to personally thank Archimedes for explaining that buoyancy and density holds for air as it does water, ergo the same principle is applied to water and air. Furthermore, physicists say that “the force of gravity does not depend on the object’s shape, density, or what it is made of, Physicists at Penn State University state unequivocally that GRAVITY DEPENDS ON MASS AND DISTANCE AND NOTHING ELSE! 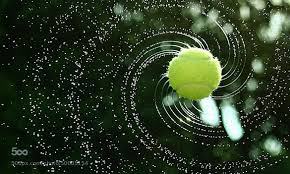 That being said, one has to infer that the water at the bottom of the ocean has more gravitational pull exerted on it than the water at the top since it’s closer to the mass of the earth. The gravity at the surface would have to be the same or more than the gravity at the bottom of the ocean in order to keep the oceans from flying off into space (remember the weight of the oceans is supposedly based from the bottom up). But wait a minute, if the earth is spinning at 1,000 mph the centrifugal force would actually make the water surface heavier as you got closer to it.

The NOAA quotes this gem, “The Effect of Centrifugal Force. It is this little known aspect of the moon’s orbital motion which is responsible for one of the two force components creating the tides. As the earth and moon whirl around this common center-of-mass, the centrifugal force produced is always directed away from the center of revolution”. The surface of the oceans would bear the brunt of the weight since centrifugal force is trying to spin the water away from it’s axis. But according to GRAVITY DEPENDS ON MASS AND DISTANCE AND NOTHING ELSE the gravitational pull at the surface has to be less because it’s further from the center of mass (the ocean floor), but somehow the magical properties of gravity change to defy its own definition.

Gravity Does Not Exist; The Theory is Fatally Flawed