Star Trek; Helio (Hell-0-Centric!) Sci-Fi Programming for the Masses since 1966 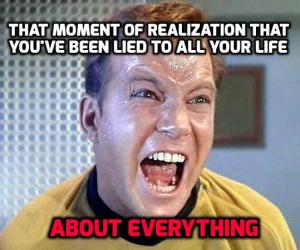 In 1966, Star Trek came to TV from the same Paramount studios that Mr. Glennan had worked as movie executive. The show’s creator, Gene Rodenberry, was a 33rd degree Freemason. The show introduced flat screen TV’s, tasers that stun, medical tricorders, cell phones and talking computers. None of these technologies was then available to the public but are every day devices since the turn of the 21st century. This will give you an idea of how long those in control have had the technology.

Walt Disney and his studios were also very heavily involved in the early years to help pull off man to the moon hoaxes, one of the greatest mind control deceptions and hoaxes in over 500 years. While Von Braun was starting up the Saturn rocket program at NASA in 1958, he was also being used by Walt Disney (Priory of Scion) to begin the selling and promotion of space exploration through TV programming. Mr. C. Fred Kleinknecht was head and Chief Administrator at NASA at the time of the Apollo Space Program. After he completed running the first Apollo missions, he resigned and was immediately named the Sovereign Grand Commander of the Council of the 33rd Degree of the Ancient and Accepted Scottish Rite of Freemasonry of the Southern Jurisdiction, located in the heart of Washington D.C. Apparently, this was his reward for pulling off the moon mission hoaxes that were created in studios like Lookout Mountain above Laurel Canyon in Southern California. Many surmise that movie director, Stanley Kubrick, creator of the film 2001 Space Odyssey, was used to help authenticate the fake moon missions and then was later killed to keep the big secret from coming known to the public