(love to hear thoughts on this post…keep it respectful please)

Below is the latest FE revelation timeline. ED Dubay is being resurrected in a well concerted effort to pump up the Flat Earth topic to the masses now. Why now?

The “first ever” Flat Earth Conference is announced 8 months in advance and includes the major FE shills and disinfo agents but not the #1 FE website and You Tube poster, nor Paul Michael Bales or Allegedly Dave..????

Russian Vid claims Alex Jones “deleted” this video yet offers no proof of this deletion, or why would Alex JOnes even allow the show to be broadcast initially. This is not passing the smell test, right off the bat.

Russian Vids is mocked last week by Josh.O on national TV and brings up Flat Earth. Russian Vids immediately responds with his video.

This guy Russian Vids is pumping up 2-3 FE videos a day.  He is breaking news on Shaq, Info Wars, etc….faster than anyone else in FE vid/docs.  Why Russian Vids? Is the name related to anything to do with Trump/Russia meme being played out at the same time Russian Vids is putting out the most vid/Docs on Flat Earth like a possessed videographer on serious Red Bull!

Now, Alex Jones show allows FE conversation on his show reaching tens of millions, promoting Eric Dubay, who has been relegated to the dust bin of irrelevance in the FE movement now (check # of comments on his Atlantean Conspiracy). It’s as if ED was led out to get all the facts about FE out and then went away after getting paid off with $100,000 from the US NVIC for Gulles-Barre syndrome injury!?! Yea right?

No other FE’ers are even mentioned by Mr. Eddie “Bravo” good friends of Anti-FE, Joe Rogan, who dissed any and all FE discussions as bunk. Hmmm. “Bravo” another code for us to ponder, like “Snowed In, Snowded” and Osama Barrack Hussein Biden Bin Laden Obama….all psyops…all of it…to confuse, to conquer by division, just like #LBGT, #Blacklivesmatter, etc. etc..

On the same day as the Alex Jones Show alleged “Delete” according to Russian Vids, we see Mr.

Where is the information that Jones deleted the interview? I can’t find it on Russian Vids or on Mark Sargents call out.HMMMMMMMMMMMMM!

So who the heck is Russian Vids pumping out several videos everyday now….breaking FE news extraordinaire…who can put out this many videos, with great details, so fast by oneself????

Interestingly, “Russianvids” is an anagram of, “via dis urns,” which may show that the purpose of the channel is to mock sincere truth-seekers.

“diss” — Latin for “apart” or “asunder”, colloquial English for “disrespect”

“urns” — a container for the remains of the dead

A channel he put up on YT over a year ago still uses his original avatar……https://www.youtube.com/channel/UCuGV4z4OttfMnJJ4oieDllA…….This is the logo for the Main Intelligence Directorate of the Russian Federation. In particular GRU ‘Spetznaz’ or the elite special forces of russian military intelligence. In 2010, GRU Spetznaz was disbanded with a few of them rebanded in 2013 and assigned to special operations. Prior to 2014, you could find vids on Liashenko’s Russianvids channel of GRU agents in military fatigue singing russian folk songs!. What is the agenda of GRU Spetnaz?……

“……The primary function of Spetsnaz troops in wartime was infiltration/insertion behind enemy lines (either in uniform or civilian clothing), usually well before hostilities are scheduled to begin and, once in place, to commit acts of sabotage (such as the destruction of vital NATO communications logistics centers) and the assassination of key government leaders and military officers……”

RussianVids, aka Benjamin P. Liashenko is a RUSSIAN JEW living in San Mateo California, a fifth column ‘special ops agent’ of  russian military intelligence, INVOLVED IN PSYCHOLOGICAL WARFARE AGAINST THE PUBLIC and in particular american citizens. The last name LIASHENKO is…….JEWISH………and thats why you will hear every conspiracy under the sun and everything and anything so-called ‘exposed’ by RussianVids except…….ISRAEL/ZIONISM/JEWISH COMPLICITY AND CORRUPTION!

Check out Bravo’s Shirt ..look familiar? Sargent comes out with Bravo story 3/18, then Bravo is with Dubay on show for 4 hours after touting him exclusively on Info Wars…and incorporates Russian Vids logo on his other you tube video channel…..hmmmmm 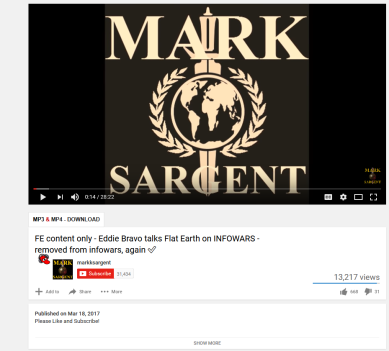 Russian Vids other Website with same logo as Eddie “Bravo” hmmm what a coincidence!

Also, logo of Interpol???? founded by the Rothschild/Rockefeller clan

and a Star Trek logo of an alternative universe named “Terran”

Do you think for one moment, Alex Jones would take off air something that was recorded on his show, released and copied, now, acussed without proof, that he took down the FE “Bravo” broadcast???

All the sudden social media is covering the FE story…hmmmm

“First Ever” Flat Earth Int’l Conference website is launched for event in November 2017…all FE’er’s of note are invited except the #1 FE website and You Tube….with super slick promo of the not ready for prime time FE “Play-ah’s”……..from the fringe to the mainstream….just as the FE meme is going mainstream viral…..hmmm. 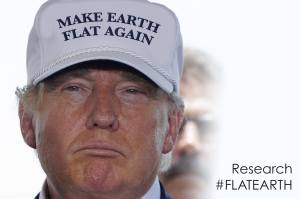 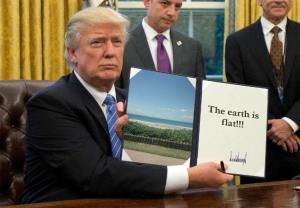