WWIII, The Holy War Has Begun; As Predicted by Freemason Albert Pyke in 1872

WWIII, The Holy War Has Begun; As Predicted by Freemason Albert Pyke in 1872

“Eradicate All (pick one or all:…Muslims, Palestinians, ISIS, Heretics AND Christians)_____ Off the Face of the Earth” 45th US President 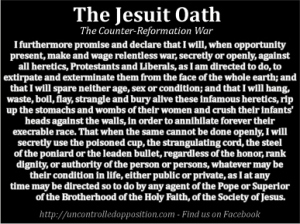 New Supreme Court Nominee;  ROMAN CATHOLIC VATICAN trained. This also gets well into the history of the Knights of Malta (Templar), rise of the Hofcourt Juden Jews and the Freemasons as well as the connections between Jesuits (Black Pope) and Vatcian (White Pope) = Same Team!

The unveiling of the 9-feet tall and 1.5 ton statue of Baphomet took place in Detroit and was dubbed “largest satanic event in History”.

On July 26th, the Satanic Temple unveiled a massive bronze statue of Baphomet sitting on a throne, complete with two children look up to him in admiration. The unveiling took place in an industrial building near Detroit River after attempts to have it installed near a Ten Commandments monument at the Oklahoma State Capitol have failed.

WWIII Holy War Has Begun, As Predicted by Albert Pyke in 1872

In 1871, Pike published the 861 page Masonic handbook known as the Morals and Dogma of the Ancient and Accepted Scottish Rite of Freemasonry.

After Mazzini’s death on March 11, 1872, Pike appointed Adriano Lemmi (1822-1896, 33rd degree Mason), a banker from Florence, Italy, to run their subversive activities in Europe. Lemmi was a supporter of patriot and revolutionary Giuseppe Garibaldi, and may have been active in the Luciferian Society founded by Pike.  Lemmi, in turn, was succeeded by Lenin and Trotsky, then by Stalin. The revolutionary activities of all these men were financed by British, French, German, and American international bankers; all of them dominated by the House of Rothschild.

Between 1859 and 1871, Pike worked out a military blueprint for three world wars and various revolutions throughout the world which he considered would forward the conspiracy to its final stage in the 20th Century.

In addition to the Supreme Council in Charleston, South Carolina, Pike established Supreme Councils in Rome, Italy (led by Mazzini); London, England (led by Palmerston); and Berlin, Germany (led by Bismarck). He set up 23 subordinate councils in strategic places throughout the world, including five Grand Central Directories in Washington, DC (North America), Montevideo (South America), Naples (Europe), Calcutta (Asia), and Mauritius (Africa), which were used to gather information. All of these branches have been the secret headquarters for the Illuminati’s activities ever since.

Albert Pike received a vision, which he described in a letter that he wrote to Mazzini, dated August 15, 1871. This letter graphically outlined plans for three world wars that were seen as necessary to bring about the One World Order, and we can marvel at how accurately it has predicted events that have already taken place.

“The First World War must be brought about in order to permit the Illuminati to overthrow the power of the Czars in Russia and of making that country a fortress of atheistic Communism. The divergences caused by the “agentur” (agents) of the Illuminati between the British and Germanic Empires will be used to foment this war. At the end of the war, Communism will be built and used in order to destroy the other governments and in order to weaken the religions.” 2
(Students of history will recognize that the political alliances of England on one side and Germany on the other, forged between 1871 and 1898 by Otto von Bismarck, co-conspirator of Albert Pike, were instrumental in bringing about the First World War.)
“The Second World War must be fomented by taking advantage of the differences between the Fascists and the political Zionists. This war must be brought about so that Nazism is destroyed and that the political Zionism be strong enough to institute a sovereign state of Israel in Palestine. During the Second World War, International Communism must become strong enough in order to balance Christendom, which would be then restrained and held in check until the time when we would need it for the final social cataclysm.” 3
After this Second World War, Communism was made strong enough to begin taking over weaker governments. In 1945, at the Potsdam Conference between Truman, Churchill, and Stalin, a large portion of Europe was simply handed over to Russia, and on the other side of the world, the aftermath of the war with Japan helped to sweep the tide of Communism into China.
(Readers who argue that the terms Nazism and Zionism were not known in 1871 should remember that the Illuminati invented both these movements. In addition, Communism as an ideology, and as a coined phrase, originates in France during the Revolution. In 1785, Restif coined the phrase four years before revolution broke out. Restif and Babeuf, in turn, were influenced by Rousseau – as was the most famous conspirator of them all, Adam Weishaupt.)

“The Third World War must be fomented by taking advantage of the differences caused by the “agentur” of the “Illuminati” between the political Zionists and the leaders of Islamic World. The war must be conducted in such a way that Islam (the Moslem Arabic World) and political Zionism (the State of Israel) mutually destroy each other. Meanwhile the other nations, once more divided on this issue will be constrained to fight to the point of complete physical, moral, spiritual and economical exhaustion.

We shall unleash the Nihilists and the atheists, and we shall provoke a formidable social cataclysm which in all its horror will show clearly to the nations the effect of absolute atheism, origin of savagery and of the most bloody turmoil. Then everywhere, the citizens, obliged to defend themselves against the world minority of revolutionaries, will exterminate those destroyers of civilization, and the multitude, disillusioned with Christianity, whose deistic spirits will from that moment be without compass or direction, anxious for an ideal, but without knowing where to render its adoration, will receive the true light through the universal manifestation of the pure doctrine of Lucifer, brought finally out in the public view.

This manifestation will result from the general reactionary movement which will follow the destruction of Christianity and atheism, both conquered and exterminated at the same time.”

Jan 25, 2017 – U.S. President Donald Trump’s first days in office have coincided with the … the changes in Washington, Israel has approved more than 3,000 new units … While Jewish settlements in the West Bank and East Jerusalem grew …

The Senate’s top Democrat, Chuck Schumer, indicated his party would mount a procedural hurdle requiring 60 votes in the 100-seat Senate rather than a simple majority to approve Gorsuch, and expressed “very serious doubts” about the nominee. Liberal groups called for an all-out fight to reject Gorsuch while conservative groups and Republican senators heaped praise on him like “outstanding,” “impressive” and a “home run.”

Gorsuch, the son of a former Reagan administration official, is the youngest nominee to the nation’s highest court in more than a quarter century, and he could influence the direction of the court for decades. He is a judge on the Denver-based 10th U.S. Circuit Court of Appeals and was appointed to that post by Republican President George W. Bush in 2006.

Gorsuch is a strong admirer of the late Justice Antonin Scalia, whom he’s referred to as a “lion of the law” and whose seat Gorsuch would inherit, and most observers expect he would play a role on the court similar to the one Scalia occupied, emerging as a strong intellectual voice for a strict reading of the constitution. At just 49, Gorsuch would be positioned to sit on the Supreme Court for a long time, potentially decades.

Born in Denver but raised in Washington, Gorsuch has a stellar intellectual pedigree, featuring degrees from Colombia, Harvard and Oxford. (At Oxford he studied under Australian legal philospher John Finnis, who converted to Catholicism in 1962, who’s drawn on St. Thomas Aquinas in his work, who later became a member of the Vatican’s International Theological Commission and whose work there is believed to have influenced St. Pope John Paul II’s 1993 encyclical Veritatis Splendor on the importance of moral absolutes.)

One thought on “WWIII, The Holy War Has Begun; As Predicted by Freemason Albert Pyke in 1872”