The Flat Earth Story of the Tortoise and The Rabbit (Hedgehog) 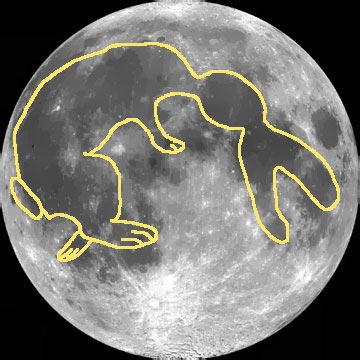 In cultural astronomy there is a flat plane earth practice of identifying the shape of a hare or a rabbit on the disk of the moon. In Mesoamerican glyphs, Indian Vedic Panchatantra, China, and Europe, there are many examples.

The clear description in Grimm’s fairy tale of Hare and Hedgehog of a race lasting 73 circuits represents the five divisions of the year by the Moon’s periods and has a parallel in the arrangement of St. Mary’s feast days over the year. Old farmer’s calendar symbols, still in use confirm this assumption. The race of the hare and hedgehog mirrors the orbits of Sun and Moon and ends with blood shooting out of the hare’s neck, which describes a red total lunar eclipse. Other data in the fable allow us to find when this eclipse could have happened, and we see there is only one perfectly matching date in the past 2000 years.

This article presents you with an astronomical and calendrical interpretation of the fairy tale “The Hare and the Hedgehog” which offers us an opportunity to date it. Similar stories exist in about 60 different versions, but common to all is a race between the slow and the fast. The archaeoastronomical and calendrical view explains it as the movement of the sun and moon. The slow sun is played by a hedgehog, tortoise, crab, pig, or snail; the faster moon by a hare, fox, wolf, stag, birds, or the devil.
The “Hare and The Hedgehog” is a popular old fairy tale and was first published in the Northern German dialect “Plattdeutsch by Wilhelm Schröder in 1840 after he heard the story at “Buxhoevden“. In 1843, the Brothers Grimm added it to the 5th edition of their Kinder und Hausmärchen.

At the 74th run of Hare and Hedgehog, blood runs out of the hare’s neck and it dies. This can be identified as a total lunar eclipse and gives us an opportunity to date it.

The Hare and the Hedgehog” (now usually the Tortoise and Hare) where the two have a race, the Sun character starts out much faster but then tires out, gets lazy, slows down, or takes a rest and is ultimately overtaken by the Moon character who wins the race. As for the exact path the Moon follows during this celestial “race,” I think it follows the exact same path I described for the Sun, except in a “slow and steady wins the race” fashion, it doesn’t speed up as the circles get wider, nor does it slow down as the circles get narrower, the Moon simply keeps trudging along and eventually overtakes the Sun during the second eclipse and wins the race back to the Tropic of Cancer. Does anyone else have any insight on this or found any relevant passages in old flat Earth material?