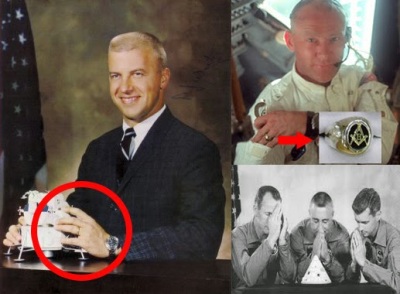 Mr. C. Fred Kleinknecht was head and Chief Administrator at NASA at the time of the Apollo Space Program. After he fulfilled his presiding over the first Apollo missions, he was named the Sovereign Grand Commander of the Council of the 33rd Degree of the Ancient and Accepted Scottish Rite of Freemasonry of the Southern Jurisdiction located in the heart of Washington D.C. Apparently, this was his reward for pulling off the moon mission hoaxes that were made in studios at Lookout Mountain above Laurel Canyon in Southern California and by Stanley Kubrick, creator of the films 2001 Space Odyssey.

Many astro-nots were either high ranking members of secret societies or came from families of Freemason lineage such as:

NASA astronauts Neil Armstrong, Allen Sheppard, William Pogue, Vance Brand, and Anthony England all had fathers who were Freemasons as well. This follows in line with the founding of Washington DC where Freemason George Washington, in his full Freemason regalia, laid the cornerstone to the United States Capitol Building. As you will see by some of the documents provided in this book, NASA is first and foremost a military operation. They take their orders from the Department of Defense, specifically, the Unites States Naval Intelligence, not the US Air Force. The Greatest Deception in Modern History has been carried out, not just over decades, but over more than a century, or at least 4 generations.