A question few in Flat Earth Nation even ask is what makes the Earth spin, according to Heliocentric Theory?  So perfect does it spin each and every minute and second, of each day, the spin is so perfect it only needs a second of adjustment every now and then, along with a Leap year, every 5 years.

According to Nasaholes, and Astro-frauds, the Earth rotates perfectly on its axis for the past 4.5 billion years because of “Axial Movement” where their is no drag, and no friction to slow EArth down more than a microsecond every now and then, WTF?

New Year delayed by one second

The National Physical Laboratory (NPL) – responsible for the UK’s national time scale – uses the atomic clock to provide a stable and continuous timescale.

Along with other clocks across the globe, it provides the world with its coordinated universal time.

NPL senior research scientist Peter Whibberley said: “Atomic clocks are more than a million times better at keeping time than the rotation of the Earth, which fluctuates unpredictably.

“Leap seconds are needed to prevent civil time drifting away from Earth time.

“Although the drift is small – taking around 1,000 years to accumulate a one-hour difference – if not corrected it would eventually result in clocks showing midday before sunrise.”

What Makes the Earth Spin?

The Earth spins at such perfect revolution that the timing of each days Earth rotation can be measured down to hundreds of thousands of seconds with minimal change.

“One hundred years from now, a day will be about 2 milliseconds longer than today. Two milliseconds is 1/500th of a second, or how long it takes a car going 55 mph to travel only 2 inches.”

That is how precise the rotation is. Yet what makes it spin?

Strangely, the answer is very, very hard to find and even harder to believe.

The basic summary is:

The beginning of our spinning revolution is said to have been caused some 4.5 billion years ago by the Big Bang and only confirmed by Copernicus in the late 1500’s”

“According to Newtonian Physics and the Big Bang Theory it is that the Big Bang set us in motion spinning and creating our angle of tilt. And if there is no change in the angle of the tilt, it will spin in ‘conservatory inertia’ forever, in perfect sync.”

“When no external torque acts on an object or a closed system of objects, no change of angular momentum can occur.”

To sum up, the Earth rotation began because of the big bang and due to zero resistance (conservation of inertia) and the back tilt of the Earth (angular momentum), it spins in perpetuity and near perfect rotational speeds for hundreds of centuries now, and well into the future.

From Physlink, Ask the Experts:

Once an initial spin was established for the Earth, the same conservation principle says that its angular momentum will continue unless it can be transferred to another object. With no significant frictional forces to allow that to happen, the Earth can continue to spin indefinitely without any further prodding.

Why do Earth and the other planets rotate at all? It will help to understand how our solar system formed. Almost five billion years ago, our solar system had its beginnings as a vast cloud of dust and gas. The cloud began to collapse, flattening into a giant disk that rotated faster and faster, just as an ice skater spins faster as she brings her arms in. The Sun formed at the center, and the swirling gas and dust in the rest of the spinning disk clumped together to produce the planets, moons, asteroids, and comets. The reason so many objects orbit the Sun in nearly the same plane (called the ecliptic) and in the same direction is that they all formed from this same disk.

While the planets were forming, there was not much peace in our solar system. Clumps of matter of all sizes often collided, and either stuck together or side-swiped each other, knocking off pieces and sending each other spinning. Sometimes the gravity of big objects would capture smaller ones in orbit. This could be one way the planets acquired their moons.

Scientists think that a large object, perhaps the size of Mars, impacted our young planet, knocking out a chunk of material that eventually became our Moon. This collision set Earth spinning at a faster rate. Scientists estimate that a day in the life of early Earth was only about 6 hours long.

The Moon formed much closer to Earth than it is today. As Earth rotates, the Moon’s gravity causes the oceans to seem to rise and fall. (The Sun also does this, but not as much.) There is a little bit of friction between the tides and the turning Earth, causing the rotation to slow down just a little. As Earth slows, it lets the Moon creep away.

We can use extremely accurate atomic clocks to measure exactly how much the rotation is slowing down. One hundred years from now, a day will be about 2 milliseconds longer than today. Two milliseconds is 1/500th of a second, or how long it takes a car going 55 mph to travel only 2 inches–in other words, much less than the blink of an eye. So, if you live to be 100, you can’t complain that the days are getting shorter! At this rate, though, you don’t have to worry about the days getting enough longer to change things very much.

From “Ask the Astronomer” at Cornell.Edu

As a father and a science lover I was dumbfounded when my 7yr old son asked me “What makes our earth turn (rotate) ? He then asked “Did it start a long time ago and it just keeps turning or is something pushing it to turn”? How does the Earth continue to rotate around its axis? Where does the energy to keep it moving come from?

Wow, what a neat question. I think it is related to the effect that we have seen when a skater who has arms extended and is slowly spinning suddenly pullls the arms into the body surface. The result is that spin rate increases. To even spin faster the skater will be standing straight with the arms up over the head. This makes the distributions of mass as close toe the spin axis as possible and makes the spin as large as possible.

If mass is widely dispersed as before condensing into a planet, and is very slowly rotating, then when it condenses into a planet (making a small moment of inertia) the rate of rotation could be large. So condensing amplifies whatever rotation there was initially.

But for the Earth rotating on its axis, there is no force working to counteract the rotation (except the tidal effect of the Moon, but that’s working very slowly), so you don’t need to have any input energy to keep it spinning.

Now, what are the chances of something not rotating exactly before it condenses? Apparently, very small since everything seems to have some rotation. I am not sure this gets to your question of why, but it has been a great question to think about. Thanks.

That the Earth rotates is a vestige of the original angular momentum of the cloud of dust, rocks, and gas that coalesced to form the Solar System. This primordial cloud was composed of hydrogen and helium produced in the Big Bang, as well as heavier elements ejected by supernovas. As this interstellar dust is inhomogeneous, any asymmetry during gravitational accretion results in the angular momentum of the eventual planet.[38] The current rotation period of the Earth is the result of this initial rotation and other factors, including tidal friction and the hypothetical impact of Theia.

This is due to the tidal effects the Moon has on Earth’s rotation. Atomic clocks show that a modern day is longer by about 1.7 milliseconds than a century ago. Not until Nicolaus Copernicus in 1543 adopted a heliocentric world system did the earth’s rotation begin to be established.

For example, the increase in rotational speed of a spinning figure skater as the skater’s arms are contracted is a consequence of conservation of angular momentum. 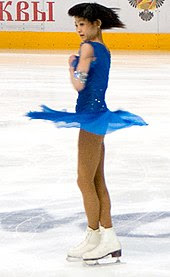 Figure skaters can reduce their moment of inertia by pulling in their arms, allowing them to spin faster due to conservation of angular momentum.[7][8][9][10]  Over millions of years, the rotation is significantly slowed by gravitational interactions with the Moon; both rotational energy and angular momentum are being slowly transferred to the Moon: see tidal acceleration

In this presentation, the presenter asks many what the answer as to cause of Earth’s rotation. There is even The ball we are told is a near “perfect granite sphere” resembling the Earth. (except, the story goes, the Earth is more oblong due to moon’s gravity pull!)

We do not see what is under the ball, only told it is floating on water, which again, does not represent the Earth spinning.

The answer, we are told by the presenter, is that once something is in motion it will stay that way unless their is external force to change.

Here we are being told that it is “common knowledge” that Earth spins due to the Conservation of Angular Momentum. Again, he cites the same actions as a figure skater moving her arms in to increase speed. (Note that he never address any angles of momentum, only upright.)

So what we are being told to believe is that the Big bang explosion, which came from nothing 14.5 billion years ago, exploded outward breaking apart inorganically then magically came back together ORGANICALLY and over billions and billions of years, formed not only the Sun, moon and Earth and stars, but our entire solar system.

Then, over vast amounts of time, the Earth slowed into perfect rotation “where no external torque acts on an object or a closed system of objects, no change of angular momentum can occur”.

And Nasa tells us that with the Earth rotating on its axis, “there is no force working to counteract the rotation (except the very slight, but huge change in Earth’s shape to ellipsoidal due to moon’s gravity) , so you don’t need to have any input energy to keep it spinning”.

So, the story goes, we live on a perfectly spinning sphere, spinning at every moment of every day 1,000 miles per hour around her axis, traveling at 1,000 miles per/second around the Sun due to her powerful gravitational pull, with our 5 mile high mountains, rivers flowing every direction, ice caps melting, season changes, jet streams, nuclear blasting in the atmosphere, and Mans massive footprint on the Earth….

….Yet the Earth rotates in perfect rotation without any resistance or drag due to the angle it is set at from millions of years ago and remains so due to the conservation of energy principle of physics.

That is why the Earth rotates.