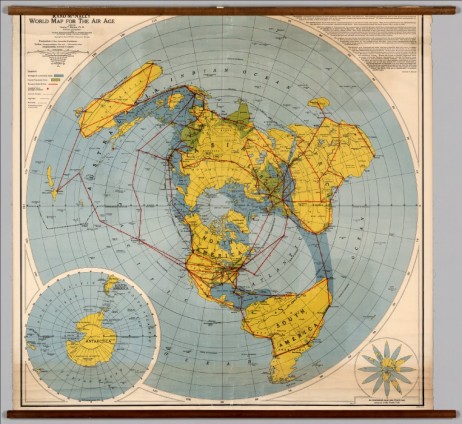 NASA is lying to us – the Earth is actually flat

Many evangelicals believe in “detailed inerrancy,” which means that the Bible, in the words of Francis Schaeffer, is “without error in all that it affirms” and contains “propositional true truth where it touches the cosmos and history.”(1) This in all probability was not the position of historical Christianity and many evangelicals themselves reject this position.

The inerrantists cannot decide which “science” to use to prove that the Bible is without error about cosmological matters. Following the lead of Charles Hodge and B. B. Warfield, writers for the Moody Bible Institute contend that the Bible is completely compatible with current theories about the evolution of the universe over billions of years. (2) On the other hand, we have “fiat creationists,” like those from the Institute for Creation Research, who reject cosmic evolution and maintain that the universe is less than 10,000 years old.

Throwing intelligent light on the question are the evangelical writers of the New Bible Dictionary. An author warns us that the Genesis account “must not be confused or identified with any scientific theory of origins. The purpose of the biblical doctrine, in contrast to that of scientific investigation, is ethical and religious….The whole is poetic and does not yield to close scientific correlations….Genesis neither affirms nor denies the theory of evolution, or any theory for that matter.”(3) Evangelical J. J. Davis concurs: “Evangelicals have generally come to adopt the position that the Genesis accounts of creation are primarily concerned with the meaning and purpose of God’s creative work and not with precise scientific details of how it was accomplished….We look to the science of genetics to answer the scientific question of when human life begins and to the Bible for revelational answers concerning the value and purpose of human life.”(4) Of course these evangelicals are correct in disclaiming any scientific foundation for the cosmology of the Old Testament.

I believe, however, that there is more than just poetry in the biblical creation account. In what follows I argue that we should take the Hebrew cosmology as a prescientific attempt to understand the universe. Parallel accounts in other ancient mythologies will be the principal evidence I offer. One of the first problems we have is that there is no word in Hebrew for the Greek kosmos. Kosmos was first used by Pythagoras, who is said to be the first Greek to conceive of the universe as a rational, unified whole. Such a notion is crucial to the scientific idea that things operate according to law-like regularity. For the Hebrews the universe is not a kosmos, but a loose aggregate held together and directed by God’s will.(5) If God’s will is free–this is an assumption threatened in some evangelical doctrines of God–then the results of such a will are not predictable events. This is why the biblical idea of creation can never be called “scientific,” and why “scientific creationism” will always be a contradiction in terms.

The most striking feature of the Old Testament world is the “firmament,” a solid dome which separates “the waters from the waters” (Gen. 1:6). The Hebrew word translated in the Latin Vulgate as firmamentum is raqia’ whose verb form means “to spread, stamp or beat out.” The material beaten out is not directly specified, but both biblical and extrabiblical evidence suggests that it is metal. A verb form of raqia’ is used in both of these passages: “And gold leaf was hammered out…” (Ex. 39:3); and “beaten silver is brought from Tarshish” (Jer. l0:9). There are indeed figurative uses of this term. A firmament is part of the first vision of Ezekiel (1:22,26), and the editors of the evangelical Theological Wordbook of the Old Testament cite this as evidence that the Hebrews did not believe in a literal sky-dome. It is clear, however, that Ezekiel’s throne chariot is the cosmos in miniature, and the use of raqia’ most likely refers to a solid canopy (it shines “like crystal”) than to a limited space.(6)

The idea of the dome or vault of heaven is found in many Old Testament books, e.g., “God founds his vault upon the earth…” (Amos 9:6). The Hebrew word translated as “vault” is ‘aguddah whose verb form means to “bind, fit, or construct.” Commenting on this verse, Richard S. Cripps states that “here it seems that the ‘heavens’ are ‘bound’ or fitted into a solid vault, the ends of which are upon the earth.” We have seen that raqia’ and ‘aguddah, whose referent is obviously the same, mean something very different from the empty spatial expanse that some evangelicals suggest.

In the Anchor Bible translation of Psalm 77:18, Mitchell Dahood has found yet another reference to the dome of heaven, which has been obscured by previous translators. The RSV translates galgal as “whirlwind,” but Dahood argues that galgal is closely related to the Hebrew gullath (bowl) and gulgolet (skull), which definitely gives the idea of “something domed or vaulted.” In addition, Dahood points out that “the parallelism with tebel, ‘earth,’ and ‘eres, ‘netherworld,’ suggests that the psalmist is portraying the tripartite division of the universe–heaven, earth, and underworld.”(8)