Amerika is an American television miniseries that was broadcast in 1987 on ABC. The miniseries inspired a novelization entitled Amerika: The Triumph of the American Spirit. Amerika starred Kris Kristofferson, Mariel Hemingway, Sam Neill, Robert Urich, and a 17-year-old Lara Flynn Boyle in her first major role. Amerika was about life in the United States after a bloodless takeover engineered by the Soviet Union. Not wanting to depict the actual takeover, ABC Entertainment president Brandon Stoddard set the miniseries ten years after the event, focusing on the demoralized American people a decade after the Soviet conquest. The intent, he later explained, was to explore the American spirit under such conditions, not to portray the conflict of the Soviet coup.

Described in promotional materials as “the most ambitious American miniseries ever created,” Amerika aired for 14½ hours (including commercials) over seven nights (beginning February 15, 1987), and reportedly cost US$40 million to produce.

If you’re not careful, the newspapers will have you h

RED SCARE I: A Jesuit Creation

(The Edmonds School of Foreign Service @ Georgetown University is named after Edmond Walsh.) 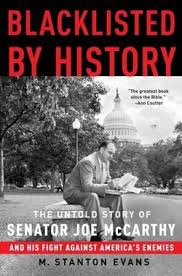 On the day that McCarthyism was born, and unseasonably warm spell was broken in Washington, D.C. It was January 7, 1950, and record-breaking temperatures — on the 6th it had reached 72 degrees — gave way to a return of winter cold. Winds announcing the cold front blew through the city at 40 mph, causing minor damage to a couple trees and a storefront window.

That night, a meeting took place at the Colony restaurant, a four-star establishment in downtown Washington. Attending were four men: Georgetown University politics professor Charles Kraus, attorney William A. Roberts, Fr. Edmund A. Walsh, a Jesuit and the head of Georgetown’s School of Foreign Service, and Wisconsin Senator Joseph McCarthy.

Of the four men, of course, the most notorious is Senator McCarthy. Since his downfall in 1954 McCarthy has gone from politician to alcoholic fiend, an all-purpose chimera for anyone warning against everything from illegal searches to mildly aggressive questioning. But the perhaps the more important man to history on the night of January 7 was Edmund Walsh, the Georgetown Jesuit.

Jim Tracy’s Memoryhole.com has been shuttered for no reason. Vigilant Citizen was written up for the Pizzagate breakdown of gross pedophilia in D.C…now they list all the Ruskie Websites, by the Wash Po, of all hit pieces.  Here comes the BIG RED SCARE REDUX II

The effort grew out of the Countering Foreign Propaganda and Disinformation Act and would supposedly stick to foreign targets. However, the Snowden revelations made us well aware that government is ready and willing to turn its powers on domestic targets — without notification. The fact that this $160 million, two-year authorization is being advanced through the annual military budget makes it all the more disconcerting. Under the guise of the war on terror, the NDAA has been used to increase Executive authority, and the 2012 version went so far as to authorize the indefinite military detention of U.S. civilians without habeus corpus.

As scrutiny of PropOrNot increases, its credibility is rapidly unraveling. But that has not stopped Beltway media wiseguys and Democratic political operatives from hyping its claims. Fake news and Russian propaganda have become the great post-election moral panic, a creeping Sharia-style conspiracy theory for shell-shocked liberals. Hoping to punish the dark foreign forces they blame for rigging the election, many of these insiders have latched onto a McCarthyite campaign that calls for government investigations of a wide array of alternative media outlets.

According to PropOrNot’s website, Russia is staging a hostile takeover of America’s alternative online media environment “in order to Make Russia Great Again (as a new ‘Eurasian’ empire stretching from Dublin to Vladisvostok), on the other. That means preserving Russian allies like Bashar al-Assad in Syria, breaking up the ‘globalist’ EU, NATO, and US-aligned trade and defense organizations, and getting countries to join ‘Eurasianist’ Russian equivalents… Or else.”

The message is clear: Stamp out the websites blacklisted by PropOrNot,or submit to the malevolent influence of Putin’s “new global empire.”

Among the websites listed by PropOrNot as “allies” are a number of groups funded by the U.S. government or NATO. They include InterpreterMag, an anti-Russian media monitoring blog funded through Radio Free Europe/Radio Liberty, an arm of the U.S. government, which is edited by the hardline neoconservative Michael Weiss. Polygraph Fact Check, another project of Radio Free Europe/Radio Liberty aimed at Russian misinformation, is listed as an “ally.” So is Bellingcat, the crowdsourced military analysis blog run by Elliot Higgins through the Atlantic Council, which receives funding from the U.S. State Department, various Gulf monarchies and the weapons industry. (Bellingcat is directly funded by Google, according to Higgins.)

Despite the Washington Post’s charitable description of PropOrNot as a group of independent-minded researchers dedicated to protecting the integrity of American democracy, the shadowy group bears many of the qualities of the red enemies it claims to be battling. In addition to its blacklist of Russian dupes, it lists a collection of outlets funded by the U.S. State Department, NATO and assorted tech and weapons companies as “allies.” PropOrNot’s methodology is so shabby it is able to peg widely read outlets like Naked Capitalism, a leading left-wing financial news blog, as Russian propaganda operations.

Though the supposed experts behind PropOrNot remain unknown, the site has been granted a veneer of credibility thanks to the Washington Post, and journalists from the New York Times, including deputy Washington editor Jonathan Weissman to former Obama senior advisor Dan Pfeiffer, are hailing Timberg’s story as Pulitzer-level journalism. “Russia appears to have successfully hacked American democracy,” declared Sahil Kapur, the senior political reporter for Bloomberg. The dead-enders of Hillary Clinton’s campaign for president have also seized on PropOrNot’s claims as proof that the election was rigged, with Clinton confidant and Center For American Progress president Neera Tanden declaring, “Wake up people,” as she blasted out the Washington Post article on Russian black ops.

PropOrNot’s malicious agenda is clearly spelled out on its website. While denying McCarthyite intentions, the group is openly attempting to compel “formal investigations by the U.S. government, because the kind of folks who make propaganda for brutal authoritarian oligarchies are often involved in a wide range of bad business.” The group also seeks to brand major progressive politics sites (and a number of prominent right-wing opinion outlets) as “‘gray’ fake-media propaganda outlets” influenced or directly operated by Russia’s Federal Security Service (FSB). It can then compel Facebook and Google to ban them, denying them the ad revenue they rely on to survive.

Though PropOrNot’s hidden authors claim, “we do not reach our conclusions lightly,” the group’s methodology leaves more than enough room to smear an outlet on political grounds. Among the criteria PropOrNot identifies as clear signs of Russian propaganda are, “Support for policies like Brexit, and the breakup of the EU and Eurozone” and, “Opposition to Ukrainian resistance to Russia and Syrian resistance to Assad.”

Timberg and the Washington Post, which is owned by the billionaire CEO of Amazon, Jeff Bezos, are being stridently called out as McCarthyites for an article published on Thanksgiving Day that cited unnamed “experts” at a shadowy group called PropOrNot to smear 200 alternative media sites as tools of Russia. The blacklist included some of the most informed and courageous voices on the Internet like Naked Capitalism, Truthout, CounterPunch, and Truthdig, where the brilliant Chris Hedges, part of a New York Times team that won the Pulitzer Prize in 2002, regularly asks the uncomfortable questions — like this one: “When we look back on this sad, pathetic period in American history we will ask the questions all who have slid into despotism ask. Why were we asleep? How did we allow this to happen? Why didn’t we see it coming? Why didn’t we resist?”

Theories abound as to why Timberg would write such a shoddily sourced article and smear some of the best writing and thinking on the Internet. One line of thought is that corporate media is struggling to survive financially and needs to take out its competition. Others see something far more nefarious. Max Blumenthal sums it up this way at AlterNet:

“Fake news and Russian propaganda have become the great post-election moral panic, a creeping Sharia-style conspiracy theory for shell-shocked liberals. Hoping to punish the dark foreign forces they blame for rigging the election, many of these insiders have latched onto a McCarthyite campaign that calls for government investigations of a wide array of alternative media outlets.”

Many of the articles trashing Timberg refer to him as a “technology reporter” for the Post because that’s currently the description under his articles. His background is far more complicated. For starters, his agent, Gillian MacKenzie, states on her web site that she “was a five year term member of The Council on Foreign Relations.” The Co-Chair of the Council on Foreign Relations (CFR) is Robert Rubin, the Treasury Secretary under Bill Clinton who played a major role in the deregulation of Wall Street and the repeal of the Glass-Steagall Act which set in motion the historic financial collapse in 2008. CFR’s Corporate Program includes approximately 200 multi-national corporations.

Timberg’s official bio shows that his earlier tenure at the Washington Post included a stint as Bureau Chief in Johannesburg where he covered political crises in Zimbabwe, Ivory Coast and Nigeria. He later became Deputy Editor for National Security and finally moved to his current post as Technology Correspondent. But when we say “technology,” we’re not talking about laptops. In this 2013 C-Span video, Timberg talks about facial recognition technology being used by law enforcement for surveillance. In this 2014 C-Span video, Timberg interviews Google Executive Chairman, Eric Schmidt, on the revelations of the NSA’s mass surveillance program. The interview is conducted at the right-wing Cato Institute – a nonprofit that was secretly under the partial ownership of the Koch Brothers for decades.

Psyops 101: A brief history of fake news : The Corbett Report