Lawrence Lessig: The Electoral College Is Constitutionally Allowed to Choose Clinton over Trump

As we continue to talk about the U.S. election system, we turn now to Harvard Law professor Lawrence Lessig, who sparked debate over the issue of the Electoral … Read More → 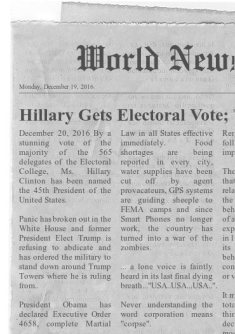 This Pizzagage, Ping Pong DC Pedophile shit is in the NY Times, full page, which means its total psyop.  And they are lumping it in as fake news, likely to target alt sites en todo. I need to get my stuff backed up.  Looks like shutting down the alt news is going to be priority now…

An activist site, memoryhole, with the fired school professor who challenged all Sandy Hook , B.s is down

and now the NYTimes, in print, named Vigilant Citizen, who is #1 in disclosing the filthy slime and abuse of children and women for a few years, is now under attack.

All orchestrated as Trump “fires” mainstream media just last week in a “private” session as he called them all out as liars….

all choreographed and the timing is …

http://www.nytimes.com/2016/11/21/technology/fact-check-this-pizzeria-is-not-a-child-trafficking-site.html?_r=0
He found dozens of made-up articles about Mrs. Clinton kidnapping, molesting and trafficking children in the restaurant’s back rooms. The articles appeared on Facebook and on websites such as The New Nationalist and The Vigilant Citizen, with one headline blaring: “Pizzagate: How 4Chan Uncovered the Sick World of Washington’s Occult Elite.”
http://vigilantcitizen.com/

None of it was true. While Mr. Alefantis has some prominent Democratic friends in Washington and was a supporter of Mrs. Clinton, he has never met her, does not sell or abuse children, and is not being investigated by law enforcement for any of these claims. He and his 40 employees had unwittingly become real people caught in the middle of a storm of fake news.

Donald Trump thinks his wife will be a model first lady — and here’s the proof.

Decades before she was sporting designer dresses on the stage of the Republican National Convention as Mrs. Trump, Melania Knauss posed nude in a photo spread for a now-defunct French men’s magazine, The Post has learned.

The leggy, Slovenian-born model — then 25 years old and known by her professional moniker Melania K. — did the steamy photo session in Manhattan in 1995, according to Alé de Basse­ville, the French photographer who shot the sexy snaps.

(Photographer Alé de Basse­ville later told The Post that he misspoke, and the photo session actually took place in 1996 in Manhattan, and appeared in a 1997 issue of the magazine.)

The images, some rarely seen and others never published, were obtained exclusively by

Why is this still a topic of Whorporate Media??

NEW YORK — President-elect Donald Trump is claiming, without evidence, that millions of people voted illegally in the election he won, issuing the baseless claim as part of his angry response to a recount effort led by the Green Party and joined by Hillary Clinton’s campaign.”I won the popular vote if you deduct the millions of people who voted illegally,” Trump tweeted Sunday. He later alleged “serious voter fraud in Virginia, New Hampshire and California.”

Wolfgang Halbig sent this around in a mass emailing this am. He was the first and most credible authority who called bullshit on Sandy Hook. He has been threatened and harrassed without end. Wolfgang Halbig is a former Florida State Trooper, school principal and nationally recognized school safety expert, is the leading researcher into the Sandy Hook.

FBI AND US DEPARTMENT OF JUSTICE:   These are just a few of the emails showing the communication inside the CT Newtown School Board Members and the School Superintendent and the NFL.
Yet the Attorney Monte Frank and Officer of the Court lies by stating that the Newtown, CT school Board has NO such records of the Sandy Hook Elementary School Choir singing at the Super Bowl.
We have laws and people in the United States have the right to the truth and we should get that from our FBI and from our Justice Department unless they are also compromised?
The attorney for Cohen and Wolf states as an Officer of the Court that the Newtown CT School Board does not have any responsive documents to my CT FOIA requests.
This request was first submitted in 2013, 2014, 2015 and finally in 2016 with the CT FOIA Director Colleen Murphy denying me a hearing in light of the fact that their Attorney says that their are NO records of that trip ever taking place.

Okay far off and whacko, maybe but this story keeps growing cajones.  Bottom line, on December 19, 2016, the 565 completely unknown members of the US Electoral College will select their choice for President of the United States.

Now the NY Times is printing first page news that Hilary has won the popular vote by such a large margin that you have to go back to the 19th century to find another comparison. So now the Clinton staff is going back to count votes again…

Hillary Clinton didn’t just win the popular vote. She won it by a substantial margin.

By the time all the ballots are counted, she seems likely to be ahead by more than 2 million votes and more than 1.5 percentage points, according to my Times colleague Nate Cohn. She will have won by a wider percentage margin than not only Al Gore in 2000 but also Richard Nixon in 1968 and John F. Kennedy in 1960.

And there bringing us along on how the Electoral College works…this past week..hmmm

How Does the Electoral College Work? – The New York Times

and with all the Ping Pong Pizza, Alt News Censorship going down, et al. anything is possible…and they have many, many options…

Hillary Clinton’s campaign will participate in vote recounts of Wisconsin, Pennsylvania and Michigan if they take place, drawing a rebuke from Donald Trump’s team that the Democrat is being a “sore loser” and part of a “ridiculous” effort.

If Green Party candidate Jill Stein initiates recounts in those states as she intends, the Clinton campaign “will participate in order to ensure the process proceeds in a manner that is fair to all sides,” Clinton campaign lawyer Marc Elias said Saturday in a post on the blogging website Medium.com. He added that he doesn’t expect the action to overturn Trumps election.

Trump focused on Stein, not Clinton, in a response. “The people have spoken and the election is over, and as Hillary Clinton herself said on election night, in addition to her conceding by congratulating me, ‘We must accept this result and then look to the future,”’ he said in a statement.

And Memory Hole with James Tracy has been shut down and Vigilant Citizen alt news website was named in the NYTIMES just as the Fake News meme has been created…yup, something big is happening, and Xmas time to boot, head up and on a swivel.