What Did George Orwell Think About The Flat Earth in 1946? 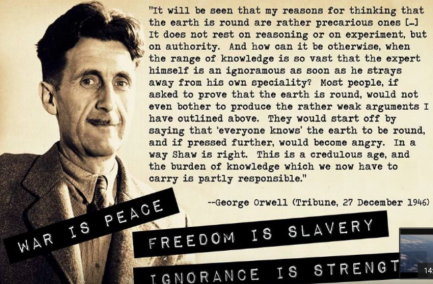 How Do You Know the Earth is Round?

[“As I Please” was a regular column in Tribune from December 1943 to February 1945 and again from November 1946 to April 1947.  This article is the ﬁrst part of Orwell’s 27 December 1946 “As I Please” column.  The present title was not Orwell’s, but was rather applied to the article by Alexander S. Peak.]

SOMEWHERE or other—I think it is in the preface to Saint Joan—Bernard Shaw remarks that we are more gullible and superstitious today than we were in the Middle Ages, and as an example of modern credulity he cites the widespread belief that the earth is round.  The average man, says Shaw, can advance not a single reason for thinking that the earth is round.  He merely swallows this theory because there is something about it that appeals to the twentieth-century mentality.

Now, Shaw is exaggerating, but there is something in what he says, and the question is worth following up, for the sake of the light it throws on modern knowledge.  Just why do we believe that the earth is round?  I am not speaking of the few thousand astronomers, geographers and so forth who could give ocular proof, or have a theoretical knowledge of the proof, but of the ordinary newspaper-reading citizen, such as you or me.

3 thoughts on “What Did George Orwell Think About The Flat Earth in 1946?”