“fabricate, devise,” 1690s, from trump “deceive, cheat” (1510s), from Middle English trumpen (late 14c.), from Old French tromper “to deceive,” of uncertain origin. Apparently from se tromper de “to mock,” from Old French tromper “to blow a trumpet.” Brachet explains this as “to play the horn, alluding to quacks and mountebanks, who attracted the public by blowing a horn, and then cheated them into buying ….”

The Hindley Old French dictionary has baillier la trompe “blow the trumpet” as “act the fool,” and Donkin connects it rather to trombe “waterspout,” on the notion of turning (someone) around. Connection with triumph also has been proposed. Related: Trumped; trumping. Trumped up “false, concocted” first recorded 1728.trump (n.1)

Later, in 2011, he advocated shutting down the federal government in order to defund Planned Parenthood, a rallying cry still common among some conservative lawmakers.

According to an Indy Star profile of him, Pence was born and raised a Catholic, an upbringing where attending Mass and serving as altar boy was an important part of his life. Sometime during college, he began attending a non-denominational church, where he met his future wife. He now describes himself as, “a Christian, a conservative and a Republican,” in that order, and he’s also called himself, “a born-again, evangelical Catholic,” a phrase met with consternation by some on social media. 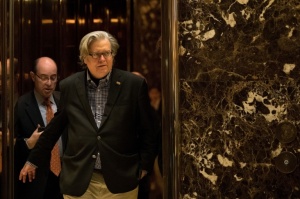 “Fear is a good thing. Fear is going to lead you to take action”

“These women cut to the heart of the progressive narrative. That’s why there are some unintended consequences of the women’s liberation movement. That, in fact, the women that would lead this country would be pro-family, they would have husbands, they would love their children. They wouldn’t be a bunch of dykes that came from the Seven Sisters schools up in New England. That drives the left insane, and that’s why they hate these women.”

Mr. Bannon made a movie in 2012 about the Occupy Wall Street protests. He told an interviewer: “After making the Occupy movie, when you finish watching the film, you want to take a hot shower. You want to go home and shower because you’ve just spent an hour and 15 minutes with the greasiest, dirtiest people you will ever see.”

We call ourselves ‘the Fight Club.’ You don’t come to us for warm and fuzzy,” Mr. Bannon told The Washington Post this year. “We think of ourselves as virulently anti-establishment, particularly ‘anti-’ the permanent political class. We say Paul Ryan was grown in a petri dish at the Heritage Foundation.”

Change??? How about military police state

After leaving the Navy, Bannon earned a master’s degree in national security studies at Georgetown University and then went on to Harvard Business School before landing an investment banking job at Goldman Sachs‘ New York offices.

“The camaraderie was amazing. It was like being in the Navy, in the wardroom of a ship,” he told Bloomberg.

After leaving that bank in 1990, he started Bannon & Co., a boutique investment bank specializing in media.

We look at some of the public statements about the country made by Mr. Bannon, the former chairman of Breitbart News, a right-wing news and opinion site

Priebus has worked with Archbishop Timothy Dolan, the Catholic Archbishop of New York, to help change both the Republican party and the face of the Church to focus on more serious topics such as abortion, pre-marital sex, homosexuality, same-sex marriage, birth control, stem cells and the ordination of women.

In reaction to Trump’s 2005 remarks about women, Priebus stated “No women should ever be described in these terms or talked about in this manner. Ever.”
Read more at http://www.christianpost.com/news/who-is-reince-priebus-171487/#QQKJ3IXmUj3lvB7F.99
***

Rodriguez, the former director of the National Clandestine Service, helped developed the CIA black sites, secret prisons operated in foreign countries where interrogators used a range of torture tactics, including the use of “waterboarding,” the simulated drowning technique once used by the Khmer Rouge and Nazi agents to glean information from detainees.

Myron Ebell serves as the Director of Global Warming and International Environmental Policy at the Competitive Enterprise Institute (CEI).[2] He is also the chairman of the Cooler Heads Coalition, a coalition built to “question global warming alarmism.” In these positions, he has taken a central role in promoting climate change denial, providing the press and politicians with material through personal contacts, press conferences and congressional hearings.[1][6]

In September 2016, Ebell was appointed by Republican presidential candidate Donald Trump to lead his transition team for the United States Environmental Protection Agency (EPA).[7] Ebell, known as a “climate change denier“[1][3][4][5] and “climate contrarian“,[2] is not a scientist. Ebell has been a critic of the Endangered Species Act, saying that it unfairly infringes on land owner’s property rights, as well as going against the protection of rare species by encouraging land-owners to make their property uninhabitable for such species to escape regulation

In 1996, he became a staff member of Senator Malcolm Wallop‘s newly founded Frontiers of Freedom Institute,[13] which promoted property rights and criticised environmental regulations such as the Endangered Species Act.[14]

In 1998 Ebell was one of a dozen public relations experts and think-tank operatives, who produced what they called their “Global Climate Science Communications” plan.[15] At this stage ExxonMobil began funding the Frontiers of Freedom Institute to implement their message strategy on global warming, and when Ebell joined the Competitive Enterprise Institute (CEI) in 1999, it too gained ExxonMobil funding.

Letter to Pope Francis by Ebell

It has been reported that Vatican officials in the global warming debate want to make sure they do not put the Roman Catholic Church on the wrong side of science, as in the condemnation of Galileo in 1633 for believing that the Earth revolved around the Sun.  Laudato Si’ fails to get the science right (see paragrahps 2026), and although the Vatican can no longer prosecute heretics, Francis has no hesitation condemning those who oppose the alleged global warming consensus (see, for example, paragraph 54).

The encyclical is a diatribe against modern industrial civilization.  In this, it should be compared to the 1864 encyclical of Pius IX, Quanta cura, and its attached Syllabus of Errors, which constitute a much more impressive diatribe against modern intellectual culture.  Francis believes the industrialized economies are wrecking God’s creation by digging far too much stuff (coal, oil, natural gas) up.  The current level of resource consumption is exhausting and polluting the Earth.

On the other hand, he thinks that the wealthy industrialized countries are doing far too little to help the poor in the unindustrialized Third World.  Paragraphs 48-52 discuss the ills caused by global inequality.  But Francis does not emphasize the need for the rich to share their wealth with the poor.  That is because Francis’s thinking on these issues, as he makes clear in paragraphs 10-12, is based on the teachings of Saint Francis of Assisi (1181-1226).  It isn’t until paragraph 82 that the Pope mentions the name of Jesus.

Next President? Jesuit or Jesuit? You Choose Amerika?!?

Obama Owned and Ruled by the Jesuits “Kitchen Cabinet”

Whether Mr. Trump picks an ideologue or a seasoned foreign policy hand from past Republican administrations, his challenge will be that the State Department is the centerpiece of the post-1945 experiment of alliance-building and globalism, which Mr. Trump said he would dismantle.

The secretary will be responsible for government borrowing in financial markets, assisting in any rewrite of the tax code and overseeing the Internal Revenue Service. The Treasury Department also carries out or lifts financial sanctions against foreign enemies — which are key to President Obama’s Iran deal and rapprochement with Cuba.

The incoming secretary will shape the fight against the Islamic State while overseeing a military that is struggling to put in place two Obama-era initiatives: integrating women into combat roles and allowing transgender people to serve openly. Both could be rolled back.

Lt. Gen. Michael T. Flynn Former director of the Defense Intelligence Agency (he would need a waiver from Congress because of a seven-year rule for retired officers)

The nation’s top law enforcement official will have the authority for carrying out Mr. Trump’s “law and order” platform, including his threat to “jail” Hillary Clinton. The nominee can change how civil rights laws are enforced.

The Interior Department manages the nation’s public lands and waters. The next secretary will decide the fate of Obama-era rules that stop public land development; curb the exploration of oil, coal and gas; and promote wind and solar power on public lands.

The Commerce Department has been a perennial target for budget cuts, but the secretary oversees a diverse portfolio, including the Census, the Bureau of Economic Analysis and the National Oceanic and Atmospheric Administration.

The Labor Department enforces rules that protect the nation’s workers, distributes benefits to the unemployed and publishes economic data like the monthly jobs report. The new secretary will be in charge of keeping Mr. Trump’s promise to dismantle many Obama-era rules covering the vast work force of federal contractors.

Victoria A. Lipnic Equal Employment Opportunity commissioner and work force policy counsel to the House Committee on Education and the Workforce

The secretary will help Mr. Trump achieve one of his central campaign promises: to repeal and replace the Affordable Care Act. The department approves new drugs, regulates the food supply, operates biomedical research, and runs Medicare and Medicaid, which insure more than 100 million people.

Despite its name, the primary purview of the Energy Department is to protect and manage the nation’s arsenal of nuclear weapons.

Mr. Trump has said he wants to drastically shrink the Education Department and shift responsibilities for curriculum research, development and education aid to state and local governments.

The secretary will face the task of improving the image of a department Mr. Trump has widely criticized. Mr. Trump repeatedly argued that the Obama administration neglected the country’s veterans, and he said that improving their care was one of his top priorities.

The hodgepodge agency, formed after the attacks of Sept. 11, 2001, has one key role in the Trump administration: guarding the United States’ borders. If Mr. Trump makes good on his promises of widespread deportations and building walls, this secretary will have to carry them out.

Jeff Sessions Senator from Alabama who is a prominent immigration opponent

The Environmental Protection Agency, which issues and oversees environmental regulations, is under threat from the president-elect, who has vowed to dismantle the agency “in almost every form.”

The president’s chief trade negotiator will have the odd role of opposing new trade deals, trying to rewrite old ones and bolstering the enforcement of what Mr. Trump sees as unfair trade, especially with China.

Second to the secretary of state, the United States ambassador to the United Nations will be the primary face of America to the world, representing the country’s interests at the Security Council on a host of issues, from Middle East peace to nuclear proliferation.

Richard Grenell Former spokesman for the United States ambassador to the United Nations during the George W. Bush administration

Mr. Trump takes over at a time of diverse and complex threats to American security. The new C.I.A. director will have to decide whether to undo a C.I.A. “modernization” plan put in place this year by Director John O. Brennan, and how to proceed if the president-elect orders a resumption of harsh interrogation tactics — which critics have described as torture — for terrorism suspects.

The national security adviser, although not a member of the cabinet, is a critical gatekeeper for policy proposals from the State Department, the Pentagon and other agencies, a function that takes on more importance given Mr. Trump’s lack of experience in elective office.