Occult Mission Patches Of NASA And Other Sinister Patches

Occult Mission Patches Of NASA And Other Sinister Patches

Mission patches are used by military and space organizations to identify, symbolize and describe a mission’s objectives and its crew. These patches offer a glimpse into the secret operations and the symbolism on them is rather striking: ominous and cryptic phrases, dark occult symbolism, references to secret societies, and sometimes a dark sense of humor. Even if one is not well informed into symbolism, it is easy to perceive a sinister meaning from the patch designs. These patches reflect the the true identity of those wearing the patches. These are some of the most sinister patches I could find…

1. All Your Base Are Belong to Us

A giant angry dragon clutching the planet, bringing destruction from space. That’s a nice way to symbolize space missions. The phrase “Omnis Vestri Substructio Es Servus Ad Nobis” can loosely be translated to “All your base are servant to us”. This phrase does not make much sense, except that it vaguely states that the world is owned by those who made that patch. They truly believe that all our base are belong to them, And they love to mock us by showing this on their patch. 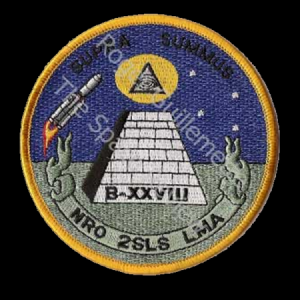 This is a patch for a NRO spy-satellite launch. Those who know some about symbolism will recognize this: An unfinished pyramid topped by the All-Seeing Eye. This All-Seeing- the all seeing eye of lucifer requires help: it needs technology to see.

“LMA” at the bottom right most likely refers to Lockheed Martin Aerospace, which is the ultimate Big Brother company working with the CIA, NRO, NSA and IRS.

Above the All-Seeing Eye is written “Supra Summus”, which can be translated to “Most Superior and Highest”, which indicates they see lucifer as the most high.

This patch was designed as a generic insignia for “black” projects conducted by the Navy’s Air Test and Evaluation Squadron Four. The Latin phrase “Si Ego Certiorem Faciam … Mihi Tu Delendus Eris” is roughly translated to “I could tell you … but then I’d have to kill you”.

In this patch for NROL-66, the red beast is holding a street sign of the mythical route 66. It is rather difficult not to see an allusion to the devil (who is often portrayed in red) and the number 666.

Furthermore, according to some occult researchers, route 66 was originally laid out to become a sort of “occult pilgrimage”.

“The famous old American highway “Route 66” was laid out by Freemasons with the apparent intention of sending masses of automobile riders into a self-processing occult “trip.”

So who is really getting their kicks on Route 66?

This patch for NROL-49 (left)  depicts a phoenix rising from the flames. The Latin words “Melior Diabolus Quem Scies” roughly translates to mean “The Devil You Know”. So it is clear it represents the devil. 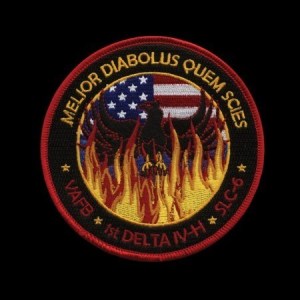 Another patch (right) related to NRO-49 a devil like creature (referred to by NASA as a devil named Betty) The patch shows the moon partially covering the earth. If you look closely, there are letters on the moon. What do they refer to? At the bottom of the patch, the Latin phrase is also enigmatic: “Primoris Gravis Ex Occasus”.  Primoris means “First”, Gravis stands for “important, heavy or serious” and Occasus means “setting of the sun, the West, or fall”. What it exactly means i don’t really know, maybe some suggestions?