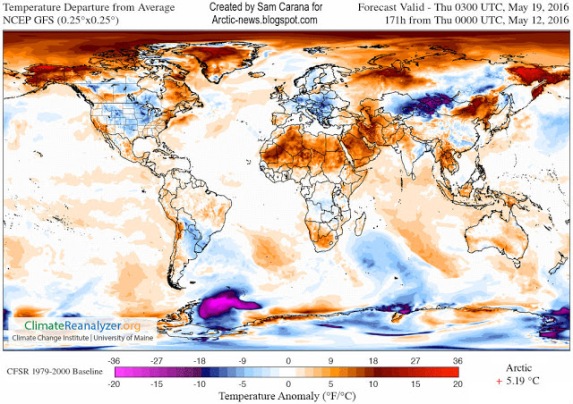 Record Temps everywhere and now due to mass methane releases, the 130X more toxic than C02 greenhouse methane gases has pushed up to 400 ppm.  A threshold that assures a continual feedback loop of melting Arctic and ever increasing greenhouse gas at the North Pole.  It generally takes 1 1/2 – 2 years before deadly C02 from methane releases in the tundra is in full effect.  God help us all and may we learn from our massive mistakes that are causing this world-wide 6th Extinction event, if any of us make it through the next decade or two….meanwhile, the sheeple sleep for just a tiny, tiny bit longer before it all becomes too hot everywhere for all to deny we are going extinct, very fast, very soon, truth be told, not sold.

The Arctic is now going to be ice free, the first time in 3.6 million years.  Is this important and critical knowledge? Read below as to the predictions, just two years ago, that this event would not happen for another 50 years!  There is no more important subject matter than this

While warming may appear to be only mild in some areas, it is felt even fiercely in the Arctic. Most heat (well over 90%) goes into the oceans, which hits the Arctic particularly hard as the Gulf Stream pushes a lot of warmer water into the Arctic Ocean. Warming in the Arctic is further accelerating due to additional circumstances and feedbacks that are specific to the Arctic, such as albedo feedbacks (as further discussed below). Continued warming in the Arctic threatens to trigger methane releases large enough to terminate civilization as we know it and to cause widespread and massive death and extinction.

Feedbacks are described in more detail in posts such as Diagram of Doom (image below) and Changes to Polar Vortex affect mile-deep ocean circulation patterns.

One such feedback is albedo change — retreat of Arctic sea ice results in less sunlight being reflected back into space, as further discussed in Albedo Change in the Arctic. Loss of Arctic sea ice is effectively doubling mankind’s contribution to global warming. Increased absorption of the sun’s rays is the equivalent of about 20 years of additional CO2 being added by man, Professor Peter Wadhams said in a BBC article.
http://www.pri.org/stories/2015-06-24/thawing-permafrost-could-have-catastrophic-consequences-scientists-warn

Methane is kept stable inside hydrates as long as the temperature remains low. Since methane expand some 160 times in volume, compared to its compressed frozen state inside the hydrate, warming of even a small part of a hydrate can cause destabilization across the entire hydrate. It may take only a small rise in temperature of a single conduit in the sediment to set off a large abrupt release of methane, which subsequently threatens to cause further releases elsewhere in the Arctic Ocean and trigger runaway global warming, as described at the methane hydrates blog.

As image 9. (left) shows, based on the figures by Shindell et al. and using a horizon of 10 years, methane’s GWP is more than 130 times that of carbon dioxide.

In image 9., the blue line is based on IPCC AR4 figures. The red line is based on figures from the study by Shindell et al., which also concludes that methane’s GWP would likely be further increased when including ecosystem responses.

The danger is that a large abrupt methane release in the Arctic will trigger further local releases. This danger is particularly high the first few years after the methane enters the atmosphere, due to methane’s high initial warming potential, as further discussed in the next two chapters. 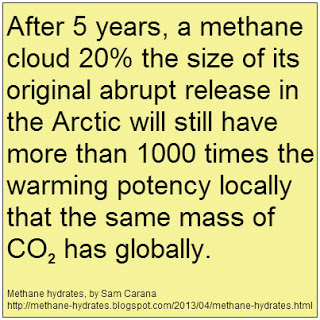 By contrast, much of the methane from an abrupt release in the Arctic Ocean will initially remain concentrated over the Arctic Ocean, which covers only 2.8% of the Earth’s surface. While the methane will eventually spread around the world, this will take time. The Jet Stream acts as a barrier, preventing air from flowing out of the Arctic and preventing air from elsewhere to enter the Arctic. Nesbit mentions that a major methane release in the high Arctic would take 15-40 years to spread to the South Pole.

Given the lack of hydroxyl in the Arctic atmosphere (see below), it may well be possible that some 20% of the methane from an abrupt release over the Arctic Ocean still remains there after 5 years. Using a GWP for methane of 130 times that of carbon dioxide over a period of ten years would already lift methane’s LWP (local warming potential) over the Arctic to (130*100:2.8:5=) 929 over 10 ten years. For a shorter period, the Arctic LWP will be even higher. In conclusion, local concentration alone makes that a methane cloud still hanging over the Arctic five years after its release will have a huge LWP, i.e. well over 1000 times the potency locally that the same mass of carbon dioxide has globally.

Another study finds that drastic sea ice shrinkage causes increase in storm activities and deepening of the wind-wave-mixing layer down to depth ~50 m (164 ft) that enhance methane release from the water column to the atmosphere. Indeed, the danger is that heat will warm up sediments under the sea, containing methane in hydrates and as free gas, causing large amounts of this methane to escape rather abruptly into the atmosphere.

Above image 21. illustrates how this dangerous situation has developed in the Arctic, and what can be expected in future without action. The image pictures three kinds of warming (red lines) and their main causes:

The heatwaves in Russia provide a gloomy preview of what could happen as temperatures rise at high latitudes. Firestorms in the peat-lands, tundras and forests in Siberia could release huge amounts of emissions, including soot, much of which could settle on the Himalayan plateau, darkening the ice and snow and resulting in more local heat absorption.

7 thoughts on “The Diagram of Doom; Near Term Extinction Odds Just Greatly Increased”