This is so friggin’ good!   Think about it.  Not one minute, not one word of any teachings of Geocentric Cosmogony in public education, common historical nature, for decades, if not centuries, Why?, if the history is so rich, as depicted below.

In Buddhist cosmology, deriving from Indian origins, the world is viewed as a system of continents and oceans, either in rings (as in the center here) or floating detached in the ocean. This nineteenth-century Burmese manuscript shows in one image both sorts of continents, and a cosmic ocean symbolized by fish, crabs, and snails. Other sections of the book show and describe the various heavens and hells. Folding accordion-style manuscripts on thick paper are common in Southeast Asia, along with loose-leaf manuscripts made from palm leaves. 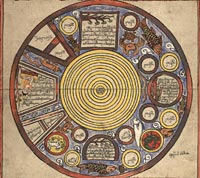 This geographical treatise and collection of wondrous tales was exceedingly popular in mediaeval and early modern Islamic society. The map shown here is unusual in its portrayal of several creatures supporting the world in the firmament. While it uses a traditional Islamic projection of the world as a flat disk surrounded by the sundering seas which are restrained by the encircling mountains of Qaf, the map also shows the Ottomans’ early use of geographic information based upon European cartographic methodologies and explorations. 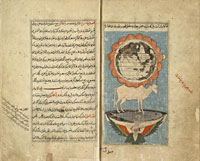 T-O Map of the World

This is the first printing of the earliest example of a map of the world, called a “T-O Map” because of its symbolic design. Originally drawn in the seventh century as an illustration of Isidore of Seville’s (d. 636) Etymologiarum, an early encyclopedia of world knowledge. The design had great religious signifcance, with the “T” representing a mystical Christian symbol of the cross that placed Jerusalem at the center of the world. The “T” also separated the continents of the known world—Asia, Europe, and Africa—and the “O” that enclosed the entire image, represented the medieval idea of the world surrounded by water.