Einstein the Fraud and Plagiarist

Hilbert’s paper is the forerunner of the unified field theory of gravitation and electromagnetism and of the work of Erwin Schrödinger, whose work is the basis of all modern day quantum mechanics. That the group of men discussed so far were the actual originators of the ideas claimed by Einstein was known by the scientific community all along.

THIS IS THE THEORY OF RELATIVITY, 13 YEARS BEFORE EINSTEIN’S PAPER!

The below article is a scorching rebuke of Albert Einstein and his alleged theory of relativity. Though this article does not reference the flat earth or geocentrism, it’s totally on par with Einstein being nothing more than a Jesuit dupe. What makes this article more salient is the perspective of the writer whom erantly believes in the heliocentric model and relativity, just not Einstein. You’ll also notice the constant inference to the “Jews” with no mention of the Jesuits or their pet creation Zionism. I would suggest that each time you see the word “Jew” you mentally substitute it with the word “Jesuit” since they are the hidden controllers that lurk in the shadows.

Despite the authors total lack of perspective on how the Jesuits control the “whole-game” from Copernicus to the present day, it’s chock full of examples of the massive fraud that is one Albert Einstein. Besides his affinity for complete and total pseudoscience, It was Albert Einstein and Leo Szilard that lobbied FDR to start the Manhattan Project and create the Atom Bomb (another Jesuit ruse). 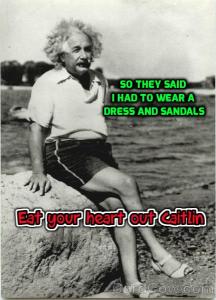 The Einstein–Szilárd letter was a letter written by Leó Szilárd and signed by Albert Einstein that was sent to the United States President Franklin D. Roosevelt on August 2, 1939. Written by Szilárd in consultation with fellow Hungarian physicists Edward Teller and Eugene Wigner, the letter warned that Germany might develop atomic bombs and suggested that the United States should start its own nuclear program. It prompted action by Roosevelt, which eventually resulted in the Manhattan Project developing the first atomic bombs. (source)

He was three years old before he started speaking, and it took him several more years before he was fluent. He did not read until he was seven, and his poor performance in elementary school caused many people to suspect he was mentally retarded.  When called upon, the boy would take forever before answering, often silently mouthing the words to himself before slowly uttering the words aloud. Most believe that it would be highly unlikely that Albert Einstein would ever succeed at anything.

When he tried to get into the Swiss Federal Institute of Technology, he failed the entrance exam and was required to take it again. His doctoral dissertation was rejected by the university as “irrelevant and fanciful.” After graduation, Einstein landed a position as a clerk in a patent office. He liked the job because it allowed him to enough free time to research some of his scientific theories.

Again, it seemed he might not achieve much more than this position since he was known for being incredibly absent-minded. For example, he would often forget to put on his socks and even misplaced a $1500 check after he used it as a bookmark. It was not until after the first of Einstein’s theories was published, the Special Theory of Relativity, that he was truly recognized by the scientific community. However…what if it was all…Plagiarized Information. What if the only thing he was good at, was stealing other peoples ideas. In some cases, even years after they were published?

What if his ‘Theory of Relativity’ really belonged to his best friend, who sent him a copy of it before he had it published?

Why if someone had published ‘The Theory of Relativity’ weeks before Einstein, were they ignored by the Media, and gave all credit to Einstein, even when proved it belonged to someone else?

11 thoughts on “Einstein the Fraud and Plagiarist”