#19 How Did Gemini and Apollo Crews Not Break Their Backs on Splashdown?

The last Apollo mission, Apollo 17, televised for splash down.

The Apollo 17 spacecraft reentered Earth’s atmosphere and landed safely in the Pacific Ocean at 2:25 pm, 6.4 kilometers (4.0 mi) from the recovery ship, the USS Ticonderoga. Cernan, Evans and Schmitt were then retrieved by a recovery helicopter and were safely aboard the recovery ship 52 minutes after landing. (Source)

At what speed could those three extremely large parachutes slow the Apollo and Gemini tin cans weighing some 45,000 pounds that severe injury would not occur when impacting the ocean?

If the parachutes did not deploy at the perfect altitude, to slow to the perfect speed and land assbackwards, all returning space heroes inside would be killed or seriously injured. Yet after ten Gemini splashdowns and and 17 Apollo splashdowns, no one ever reported breaking a finger nail, much less dying due upon impact with the hard, flat ocean, or lines getting tangled, or chutes not deploying properly, or entry speeds missed.

We also look into the absolute impossibility that the tiny Apollo nose cone could of held the three large re-entry parachutes, two drogue chutes that lead out the main chutes, hundreds of feet of parachute rope and righting buoyancy balloons in a tiny craft holding three men measuring 10 ft wide by 8 ft. tall.

Back ass first they go into the Big Splashdown, and the largest surface of the craft is what is designed to impact first, a 10 foot circle of solid metal surface. hmmm.

Check out Apollo 15 “official footage” of splashdown. Note one chute not deployed as well as the severe amount of impact when hitting the ocean.  Those astronots backs would have hit a tremendous blow of flat, heavy metal hitting flat hard ocean.

think of what would be the 3 astronot’s body position on impact. Head and back first.

The components of the ELS were housed around the forward docking tunnel. The forward compartment was separated from the central by a bulkhead and was divided into four 90-degree wedges. The ELS consisted of three main parachutes, three pilot parachutes, two drogue parachute motors, three upright bags, a sea recovery cable, a dye marker, and a swimmer umbilical.

(~ note how no mention of the three 60 ft. + parachute ropes is included in this storage scenario, as well as any pictures from NAZA that showed how it all fit in the tiny tin can called Apollo)

The Command Module’s center of mass was offset a foot or so from the center of pressure (along the symmetry axis). This provided a rotational moment during reentry, angling the capsule and providing some lift (a lift to drag ratio of about 0.368[4]).

The capsule was then steered by rotating the capsule using thrusters; when no steering was required, the capsule was spun slowly, and the lift effects cancelled out. This system greatly reduced the g-force experienced by the astronauts, permitted a reasonable amount of directional control and allowed the capsule’s splashdown point to be targeted within a few miles. (Source)

Apollo 11 Command Module “Columbia” on display at the Smithsonian Museum

How did it fill all this in such a tiny space, look how big those chutes are fully deployed (above), plus three huge chutes of red and white (see above), plus accompanying rope of 60 + foot in length X 3, plus two drogue chutes to pull out the big  chutes out , plus three good size self righting buoyancy spheres. recovery cable, dye marker and swimmer umbilical???

Really!!! Look how big the chutes are compared to the Apollo 17 craft. It all fit in the nose cone?

Where are the lines boys?… hmmm

How did these guys get so clean shaven after eight days in space?

…and where are the tangled chute lines and chute??

Three of these inside the nose cone?

Main parachute deployment bag. All of the hardware displayed here was compressed and packed into this small bag via a special ram. When the pilot chute is mortar deployed, it extracts the main chute. The deployment bag was inverted as a result .

Main parachute deployment bag. All of the hardware displayed here was compressed and packed into this small bag via a special ram. When the pilot chute is mortar deployed, it extracts the main chute. The deployment bag was inverted as a result

One of three main chutes.

At 24,000 feet (7.3 km) the forward heat shield was jettisoned using four pressurized-gas compression springs. The drogue parachutes were then deployed, slowing the spacecraft to 125 miles per hour (201 km/h). At 10,700 feet (3.3 km) the drogues were jettisoned and the pilot parachutes, which pulled out the mains, were deployed.

These slowed the CM to 22 miles per hour (35 km/h) for splashdown. The portion of the capsule which first contacted the water surface was built with crushable ribs to further mitigate the force of impact. The Apollo Command Module could safely parachute to an ocean landing with at least two parachutes (as occurred on Apollo 15), the third parachute being a safety precaution. (Source)

Damn, these guys at NASA are good!

To land right next to an aircraft carrier, coming down at 230 mph before being jerked to a slow halt as  three huge parachutes deployed,  along with hundreds of feet of parachute rope,  that miraculously do not appear in any pictures of the splashdown. hmmm.

Where is the 3 large parachutes and harness lines that total hundreds of feet of rope that would of been all around the craft and nearby ocean?

Look the nose cone filled with equipment already. Can you imagine that tin can hitting the flat ocean and not killing all inside? Where’ the parachute lines?

Oh there are the main parachute lines. Really? Looked how wrapped all around, when not on any other landings. Also, those lines are like the ones around the floating rescue boats yet held 42,000 pounds of a tin can plus 3 main chutes?

And if that isn’t enough, the astronots, the story goes, had to transfer out of the Command Module and back after the Moon mission by going outside in a space walk.

They would of had to carry all life support equipment as well as any moon rocks, etc brought back while they returned into the Command Module for the ride home!  hmmm

After the lunar module and command/service module docked in lunar orbit, crew transfer would ordinarily involve the command module pilot removing the CM’s probe assembly and docking hatch, while the LM crew would open the LM’s docking hatch and remove the drogue.

A test of this procedure was planned for the Apollo 9 mission, but was canceled when Rusty Schweickart suffered a bout of space adaptation syndrome (space sickness).

Space Gymnastics? They did this maneuver on every Apollo mission? 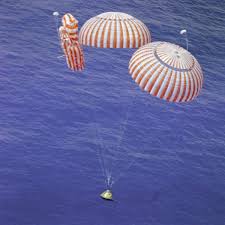 Apollo 15 one Chute apparently did not deploy, yet miraculously did not entangle in other chute lines nor cause too much speed for astronots to hit ocean and die on impact.

Apollo Parachute movie.  Note how many cut away’s and CGI while not showing all three chutes in deployment. Note how guy is reading from a script.